Europe 12′: Prague- The Three Angles of the Vltava river

Prague is always a must-see city. 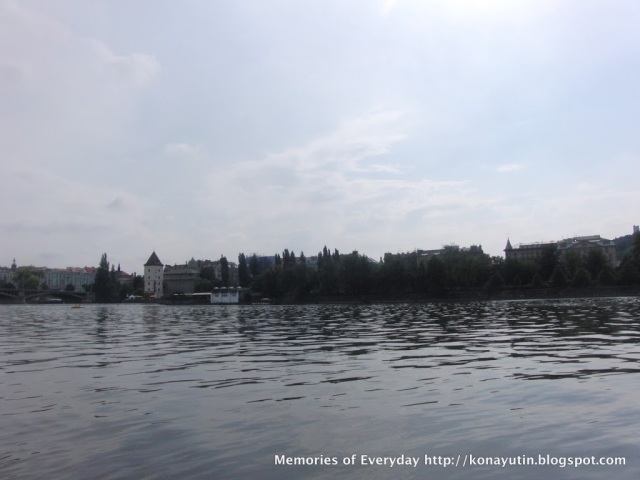 Having wondered around this classical yet cosmopolitan city for three days, it is difficult not to set your eyes on the Vltava river. I think the blue water really matches well with the warm-coloured buildings of the city.

Therefore, a visit to Prague is far from completed without a visit to the Vltava. During my short stay, I have managed to find three breathtaking (some literally) views of the river and the splendid Prague.

Whenever there are rivers crossing through civilisations, there will be bridges. In Prague, the most famous bridge is, of course, the Charles Bridge. Completed in the early 15th century, the Charles Bridge is the symbol of the prosperity and importance Prague enjoyed in their long history.

Our hostel happened to be very close to the Bridge and from the Old Town side the tower of the bridge can be clearly seen. This was where tolls were paid throughout the years, but now it is the premier attractor of cameras. Its black tower again stood out among the nearby walls.

Although I am nothing different from a typical tourist, I was more attracted to the view in front. Once on the bridge, the reason why the Charles Bridge is the most fitting tourist attraction in a city like Prague became immediately clear.

Imagine yourself standing on the bridge midway from both sides. The stunning Prague Castle is not far away in front. Around you are blackened historical sculptures. While time has certainly taken its toll on them, yet they were still there, watching and guiding travelers for hundreds of years and ever after. (Okay, I found out online later that these structures are in fact all duplicates)

And then you could also see small souvenir stores, with their owners seemingly more interested to enjoy the beautiful view which in turn promoted their products, and, of course, the painters concentrated on those last brushes.

This is Prague. It’s artsy enough that Instagram wasn’t necessary. 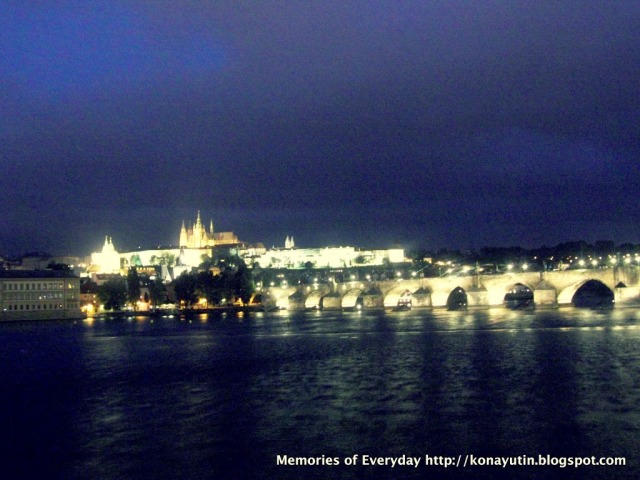 The bridge gave off a different vibe at night though. At night, the old city is dominated by the light shining on the castle and the bridge. Unlike the more popular night views, there are very few lights and for me that gives off a sense of tranquillity, not often seen in bigger cities.

The second view requires slightly more strength. Petrin is a famous hill above the Prague Castle, in which the Petrin Park makes up the majority of its area. If you wanted to save a bit of cash, try walking up all the way. It takes about 30 minutes on a well signposted road. However, this has the bonus of walking through some of the beautiful streets of the Small Town as well. 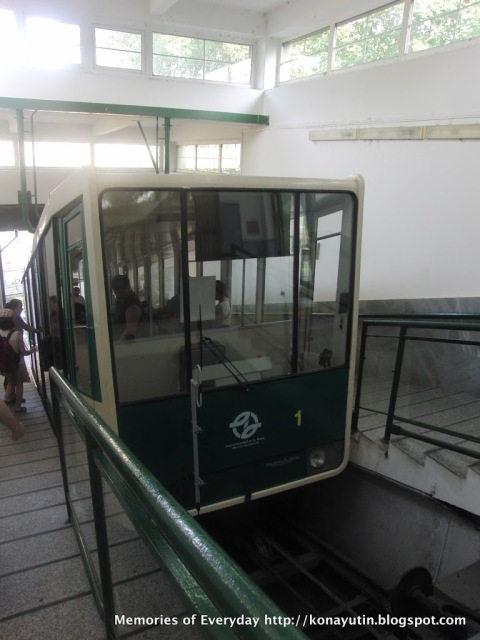 Alternatively, take the Petrin funicular which instantly reminds me of the Peak Tram in Hong Kong. A famous transport that takes you up a hill providing great views along the way- if you have managed to squeeze near a window.

The hills on Petrin has always served as the back garden of Prague. It’s cooler when you are surrounded by all the trees. Important scene sets of novels by Kafka and Milan Kundera, it gave off the classical feel when strolling in the park, almost like Paris. 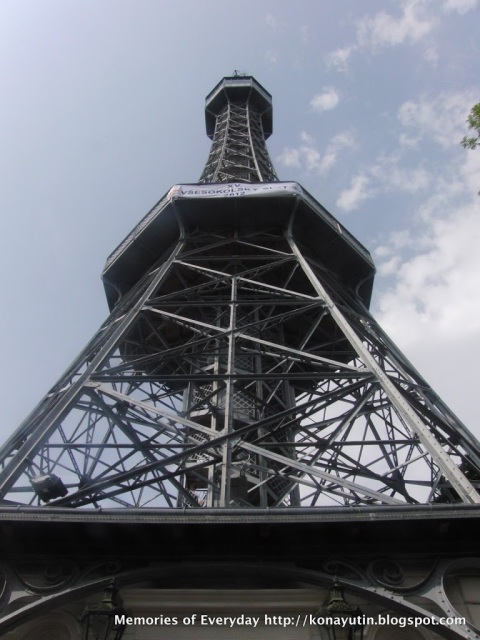 Speaking of Paris, you might be surprised to find the Eiffel Tower in Prague. The Petrin Lookout Tower actually has an octagonal base, but the first thing upon seeing it would definitely be its more famous counterpart. Standing at 60m tall on top of a hill, it actually gives off a higher viewing point than the Eiffel Tower.

>Again, there are two different methods to climb the tower. You can take the lift to the highest level if are willing to pay double the entrance fee. Or you walk up the 299 steps all the way up for the tower, visiting the 30m viewing platform on the way. 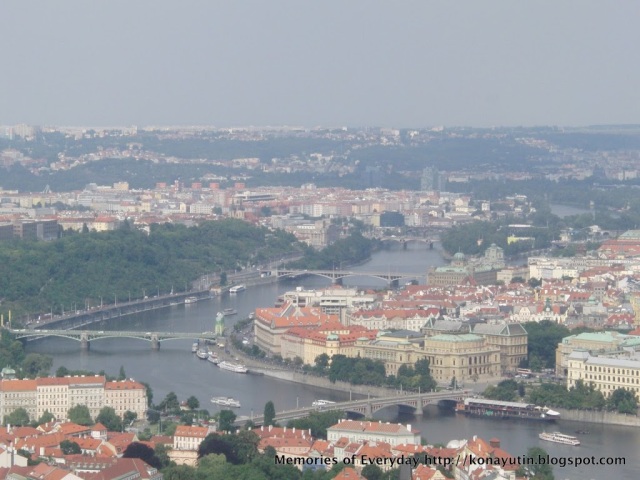 Once you are up there, well you will realise all those efforts dragging yourself up the stairs be seriously worth it. The whole of Prague, both classic and modern just under your eyes. Virtually unscathed during the World Wars, this is perhaps the best spot to stare at the sheer beauty of the city. The red roof and yellow walls gave me a warm feel.

The New Town of Prague sits just south of the Old Town. The Soviet-style blocks and the newer high-rise built in the last 20 years surround the Old Town. While they do look very different from the aesthetic setting of the Old Town, but Prague doesn’t exist solely as a touristic museum but also the capital of the Czech Republic. Development is necessary, the important thing is how to achieve the perfect balance between preservation and development.

Upon seeing the spectacular sight, I must say I am really glad none of the previous Czech governments has decided to tear down the Old Town…

Petrin also offers a couple of pretty parks (with budding roses) and some playgrounds. Its high elevation makes it a great lookout point for the whole city.

For the last angle, let us return to the original.  Many companies offer cruises on the Vltava river of various duration and route, but this is not the cheapest way to enjoy a stroke on the river. 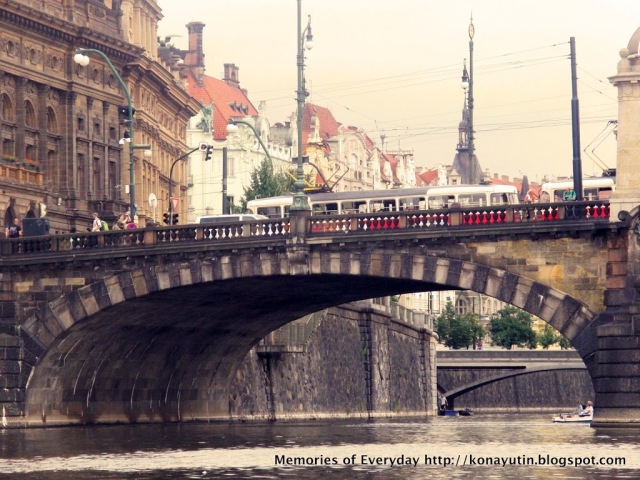 Considering my poor ability with water, swimming across is clearly not an option. Being a key shipping lane, it never occurred to me that paddle boating is a viable option. 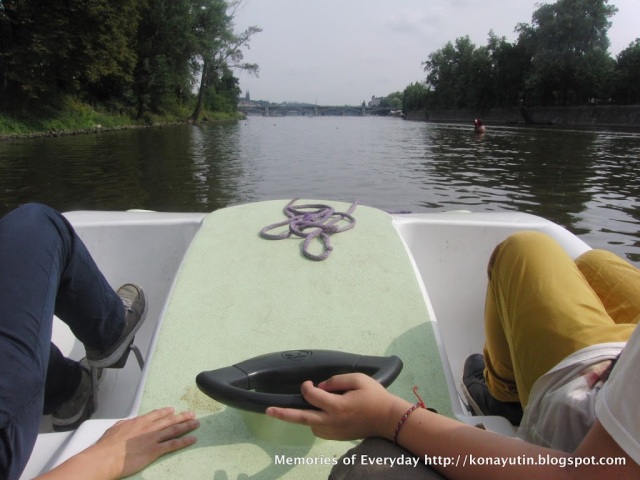 I have always enjoyed paddle boats, but I have never imagined it sailing on an open river (technically I can reach the oceans). Obviously, this gets you much closer to the river then any cruise ships.

Of course we could only move around within a section of the river, but as far as memory goes this section included three or four bridges between, making an hour trip barely enough to cover the whole section. Perhaps because of the currents, making the trip up and down the river was exceptionally easy, well at least compared to those 299 steps we hiked.

Also, it cost us a few hundred Czech kronor to cover for a four-seat boat, which is a huge bargain over the cruises. As long as you are physically capable of getting onto them, I would really recommend it.

So that completes the three angles of the Vltava in Prague and the first English post of this blog. Hope you have enjoyed it and please subscribe (on the right) and follow my newer posts!

One thought on “Europe 12′: Prague- The Three Angles of the Vltava river”