The Nightmares of Fire Alarms

After many years of living in a boarding house environment, you tend to get used to most things that happen around you.

School food. Laundry. Following the timetable. You either grew used to it, or grew to tolerate it.

However, there is one thing that I have never, ever got used to. Even if I know perfectly well when it is going to happen, when it happens, I would still be freaked out, and then complain about it. Like write a whole blog post about it. 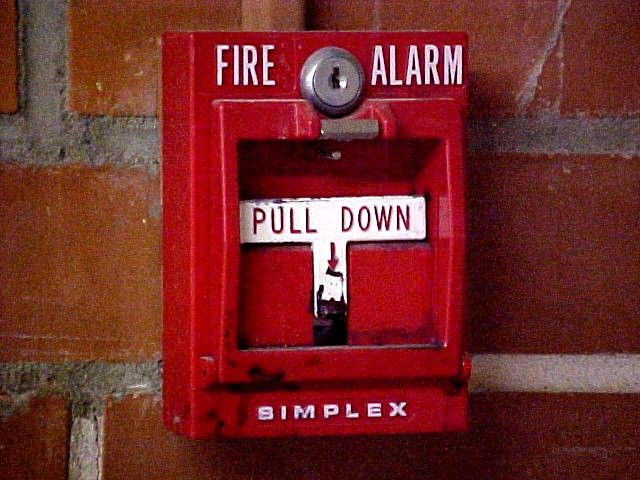 You scanned through everywhere in your room, looking for anywhere that could possibly expose you to the cold. You made sure that the radiator would not suddenly turn itself off during the night. After triple-checking that all windows are closed, you grabbed all the duvet you can find before burying yourself inside the warmth of your bed…

Then all in the sudden a loud, ear-piercing noise surged through the walls, just like those signalling runaway prisoners in movies. Your subconscious screamed- ‘FIRE!!!!!!!!!’ and so, before thinking about anything else, you burst open the door and ran for your life.

Only for about 5 seconds. Because something’s not right. If this were a PROPER fire, surely there should smell of burning wood? Also, why were the staff holding a tea-mug and just chatting with each other?

Whilst the loud noise continued to shriek through the fire alarm, you were no longer worried. Just annoyed. Because it’s yet another stupid fire drill.

When there’s a fire drill, one would have to leave the building. Seconds after walking outside, you realised that this normal t-shirt that you were wearing was not going to do anything against the freezing wind. (insert swearwords) But actually, just opening your mouth to swear was too difficult a task. All you could do was to hide next to your friends, cuddle the way penguins do in order to keep warm. (insert swearwords in mind) So instead you started cursing the person who decided to hold a fire drill at this time of the night, or whoever that caused the alarm to ring, thereby condemning you a seemingly-lifelong sentence out in the cold with a single t-shirt on…

Until you realised somebody was actually worse off. When the fire alarm sounds, there is always that unlucky somebody who was in the shower, and could only ‘escape’ wearing a wet bathrobe, or pretty much next to nothing. He would be screaming, too.

And then you found out that it was a piece of bread stuck in the toaster that brought you all these mishaps. It was something that insignificant and of course there were no casualties. However, if you happened to walk pass a boarding house fire drill, you might have thought that a severe accident has just occurred. Since those who have managed to ‘make it out alive’ were standing in the ‘evacuation’ point, half-dressed, wearing as if they have just lost all their belongings in this ‘GREAT FIRE’ while slowing freezing to death.

Yeah, it might simply have been a fire drill, but really isn’t that far-fetched from an actual fire.

In addition, this ‘unfortunate’ event can very well get worse:

Firstly, sometimes the fire alarm will be in a bad mood, just like a little child trying to catch their parents’ attentions. Those in Durham might remember that night when the fire alarm sounded for about… six times in two hours? Apparently, I would be fined if the authorities find out I didn’t respond to a fire alarm. Therefore, even if I was absolutely certain that there wasn’t a single flash of fire within like a X mile radius, I still had to make the trip down to the evacuation point six times…

Secondly, let’s return to the imaginative model above, but move the time when it occurred to anywhere between 2am and 7am. I think it requires no further explaining. Because, being awaken by a fire alarm is definitely one of the worst things human lives can suffer from. The most annoying ones, though, happen at 6am. These 6am fire drills often make their way into boarding lives when people are repeatedly late for school. So, rather than a ‘fire drill’, they are more like ‘ultimate alarms-clocks’…

Nowadays, of course I am prepared. Before going to bed, there will always be a coat and a pair of shoe that I can easily put on lying in very obvious places, so I can just grab them and run.

You might (with plenty of justification) ask: why do you even bother with the fire drills, if they are this annoying?

Even if there is a real fire only once out of say, one million times the alarm rang, I reckon I would still run out of the building a million times like an idiot. Afterall, it’s a whole lot better to be an idiot than be burnt alive.

Also, I would be fined.