A Week in Devon: SOUTH 德文郡一週：南德文

After spending a very nice few days (if slightly boring…) in the North of Devon, I headed South, to stay with a friend.

Of course, having a local around when you are touring a place is about the best thing you can hope for. I have his annoying thing for trying to not appear as a tourist when I am travelling (as you can imagine, it’s easier to do that in Tokyo than in Paris), and when someone is there to point you out everything and taking you everywhere, it certainly helps.

Torquay: We didn’t really spend that much time in the seaside resort, except for going up the wheel and listened to perhaps the most detailed and sophisticated audioguide on a wheel EVER. It’s got so much facts that I genuinely thought I have learnt something useful-. Not that I remember anything now. But it’s true that the harbourfront was beautiful and a very nice place to have a pint or two.

Kingswear/Dartmouth/Totnes: Let put them together.

On the second day we took the steam trains from where I stayed down to Kingswear, on the mouth of the river Dart. While steam trains are not necessarily my favourite, just being able to travel by train on a journey was a big plus, if not a bit too short for me. This views from the train was mostly blocked by trees, but as we pulled in the estuary across Dartmouth… 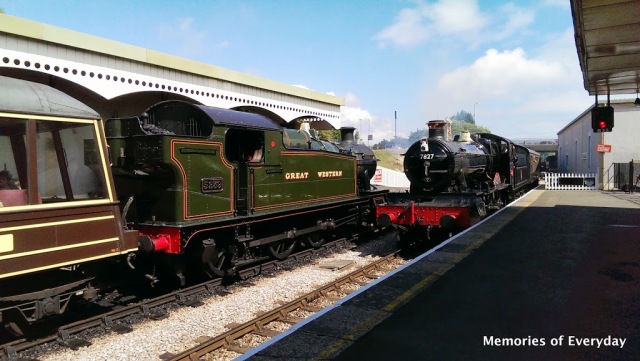 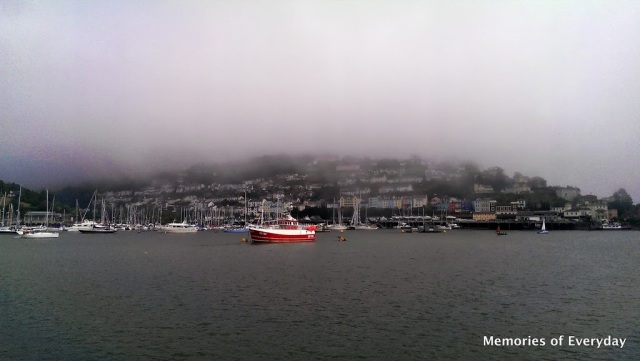 On a bad day apparently, as it was all fogged up. But I actually liked it that way. Since you are only see some of the houses and not others, it gave off a certain mystic vibe for the town, almost like hidden to strangers.. (*start of an epic pirate tale*)

You then cross over the river Dart by ferries connecting the small towns of Kingswear and Dartmouth, piers located just outside the railway station. This is no tourist ride. Sea acted as if it was going to get rough (but didn’t – yay!). Yet the short journey provided the perfect opportunity to see both sides of the estuary (again, in fog…)

Dartmouth is a small town populated by some lovely, artsy shops along the coast. Now I am no expert at jewellery, so the Pub turned out to be the most interesting. The pub we went to for lunch offered a ‘Husband Creche’ service: basically it lets you drop off your husband/boyfriend/anything reassembling them at the pub while you can go shopping unmolested. GREAT IDEA.

After lunch (which, of course, was seafood) we got ourselves onto a more touristic ferry, and headed upstream towards Totnes. The whole journey took about an hour.

Now I was not a great fan of ‘river cruises’ thanks to the one I have done recently in Bath. You might not have heard of river cruises in Bath. And that was exactly the problem. Nothing happened. Nothing to see but the trees. WHAT. IS THE. POINT, but to make to fall asleep? I had no idea. (The bigger problem was that, since I thought there WOULD BE something to see, I tried very hard to stay awake. Only to be greeted by nothing…)

Anyway. back to the cruise in Devon. In terms of ‘sights’ this was not a cruise along the River Seine, yet you still get to see a few beautiful villages by the river that would otherwise by very difficult to get to. Also, the shining sun certainly helped.

Plymouth: This was my first time there, and I was lucky to have been on a great sunny day. We have only done two things, both somewhat related to marine life.

Firstly, Lunch. Being in one of the most famous fishing harbours in the country, a seafood lunch is of course a must. My friend took me to a place called ‘Platters’ right in front of the harbour, and there I had some of the best fish in my life! (considering I have ‘lived’ in Japan before, I see this as a great compliment.)

After eating fish, we then went off the see fish – in the National Marine Aquarium. It’s the biggest aquarium in the country, and so it is the best place to go if you would like to see some fishie fishie. The Aquarium is divided into different zones, where you can see marine life from around the coasts of Plymouth. Gutted to have missed out on the Sea Turtle though.

So that rounds off a week in Devon. It’s a very nice county and ideal for a holiday. Perhaps I will return soon!