What if MTR station names are translated literally? 地名意譯的港鐵圖

As somebody who loves the railways, my interest immediately extends to railway maps. It’s quite common to mess around with the underground map in London; but doing that is too mainstream. Rather, how about if I do something to the Hong Kong MTR map?

With Cantonese place names in Hong Kong, its English name is the simply a phonetic transliteration. As a result you get names that are almost impossible to pronounce correctly without Cantonese knowledge. Moreover, the toponymy of some Hong Kongese place names are actually different in Cantonese and English, further complicating the issue.

Instead of a translation by phonetics, how about one by meaning?

Rather than ‘Mong Kok’ and ‘Causeway Bay’, how about ‘Prosperous Corner’ and ‘Gong Bay’? (Click to enlarge) 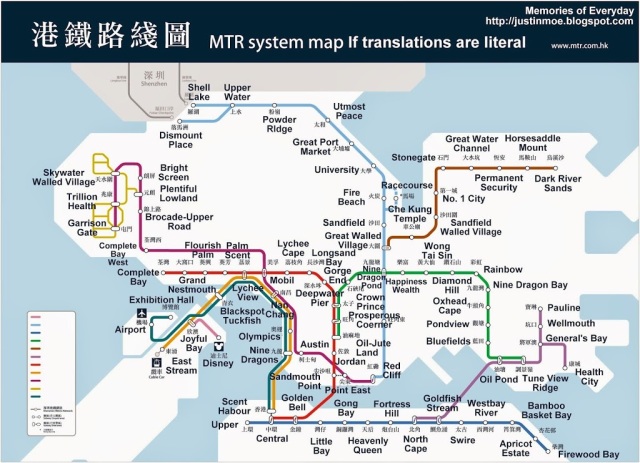 p.s. I’ve received some very warm feedback for this and thanks to all for that. Many Cantonese speakers have kindly suggested that the translation was not precise enough and ignored the original etymology for a few places. (Admiralty, for example)

I want to make it clear that the purpose of this exercise is to let the non-Chinese speakers among us to have some ideas as to what the MTR map is actually saying to the Chinese speakers. Indeed, that’s why Prince Edward Station was changed despite the Chinese version having pretty much- but not exactly- the same meaning. Hence, this is a literal, and not (necessarily) a precise version.

Not gonna lie, that took a lot longer than I thought. But it is actually quite fun. Also in the process I managed to amuse myself with a couple of inappropriate/ politically incorrect/ downright vulgar names in the process, so there is another map coming maybe? Map from the MTR website.

15 thoughts on “What if MTR station names are translated literally? 地名意譯的港鐵圖”