In the previous post, I have discussed a little bit about the career-mindedness and the importance to a big salary as reasons to why people from East Asia, or of Asian heritage tend to study subjects related to finance or ones that lead to a professional career i.e. the ‘Asian subjects’.

Family authority plays such a central role in Asian society that it has to be mentioned which we discuss any supposedly Asian phenomena. So without further ado… 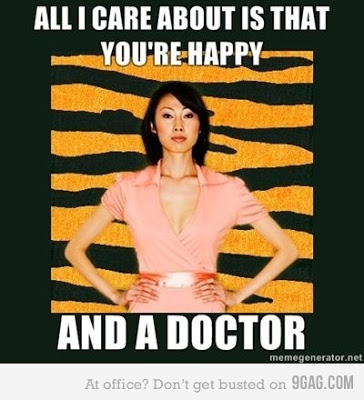 ‘I study this because my parents told me to’

It is difficult to grasp the so-called ‘Asian parents’ phenomenon. For starters, it’s a parent v. children issue which is always extremely complicated anyway across cultures. In general, parents has the authority and the children are expected to obey the decisions through filial duty, although in this system of ‘benevolent paternalism’ the children can also expect most of their lives catered and financed by their parent until they graduate from university.

This is particularly the case in education: the funding is often provided by parents as per Confucian principles (especially likely when they are studying abroad, as there are no student loans available), so they come to have quite a lot of control over the matter.

In societies like this, children are not really encouraged and thus generally have little experience about making a life decision. Combined that with a highly vigorous academic syllabus with demanding exams that does not incite many interests in subjects, you get a group of teenagers with little interests in studying anything, even if they are achieving academically.

If they have no idea or interest to study anything, why bother picking a fight and opposing  your parent’s wishes if they are going to fund you through university doing something that could earn you money down the line?

Obviously, parents want their sons and daughters to succeed in life. But why would they think that studying ‘Asian subjects’ is the way to go? There are two reasons: experience and stability.

As mentioned, free-market enterprises had lifted millions in East Asia from poverty into the middle and upper classes in the past half-century. Who are the main beneficiaries? Young people of the 70s and the 80s; the generation of my parents. In a short time, they have seen their lives transformed for the better. My father grew up in a household of demolition workers, yet within a generation he was able to send his son to study in the UK. Quite a change, eh?

(And if you grew up as a second or third generation immigrant in the West, a similar mindset exists too, although for slightly different reasons. Most immigrant families would have also experienced economic hardships in their early life, and also see the professional ranks as a way to advance the social and economic ladder. Would not claim to be an expert on this, though)

The generation of our parents had seen their living standards rise rapidly with the help of the free-market corporate formula to financial successes. For many in their 50s and 60s, becoming an accountant or lawyer or banker has proven to be the method to lift themselves out of poverty. Therefore, they became trusted advocates of the system itself, economic and politically reactionary and are keen to see their children achieve success through the same process. Can you blame them?

However, parents do not simply wish that their children become filthy rich. If earning as much as possible are the sole objectives of these so-called ‘Asian parents’, then surely some other possibly high-earning career (say, professional sports) would not be as frowned upon stereotypically. Professional careers are so revered in Asia not only because of its salary but also in its stability.

Musicians and sportspeople might be among those who earn the most in the world, however only a tiny proportion of those make it onto the big stage. Whereas if you becoming an accountant, as long as you are not particularly incapable, you will have a job that would set you for life. In countries like South Korea, these corporations also have a paternalistic employer-employee relationship, meaning that once you get into, say, Hyundai, you are likely to be employed until you retire.

And in a society dominated by the corporate world, it is the best bet to a stable and materially sufficient life. Ultimately, wherever they are from, isn’t that what parents hope for?

Of course, there are plenty of other reasons as to why there exists a vocational and utilitarian approach to higher education, two pieces like these can only touch the surface. I hope, however, it has provoked debate and allow you to consider the stereotype in a new light.