(Durham) Freshers: it’s been a month with college food. What’s that been? 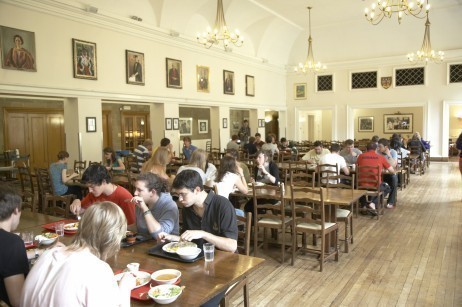 There’s a good chance that your answer can be reconstructed by these words: ‘not too bad’; ‘bland’; ‘repetitive’ and most of all, ‘potatoes’. In fact, I’m willing to bet you few potatoes for that, not that you’ll want more of them anyway.

Being fed three (although you’ll probably only go to two) meals a day is about the best thing that could happen to your diet during your (usually) dysfunctional first year. Of course, if you are used to the luxury and comfort of home cooking, college catering will inevitably seem a bit boring and tasteless. You can’t beat mum.

However, I must be one of the few souls that genuinely enjoyed college food. Why? Because I came from a place where I have learned to have even lower expectations on catering. Such is the life of a boarding house kid.

When I first arrived at boarding school, hopes were initially high on the catering department: which teenage boy would not salivate at the prospect of an all-you-can-eat buffet three times a day?

This is already the much-improved version

However, the senior guys seemed to all have container ship loads of instant noodles or other sorts of comfort food everywhere. Why do they even need these?

Unfortunately, I had to discover this the hard way.

There seems to just have something wrong about school catering across the world: even if you come from a land renowned for its culinary skills, the school food can still be operating at a few tiers below the national standard (this even applies in Japan!)

And for a country like the U.K., where food is at best ‘tolerable’, school food can be, well, terrible.

Here’s a few examples, for your sympathy:

For religious and (most importantly) health and safety reasons, most of the meat would be well done. In fact, probably for well done than it ever needed to be. The chicken breasts are so overcooked and tender that they cannot be bitten into. Same goes for burgers. HOW CAN YOU POSSIBLY MESS UP BURGERS?

Overcooking extends into fruit and vegetables. Do you know what happens when you over-boil broccoli? It melts. The mixture of it really is isn’t great. But at least it’s easily edible.

Because I’ve actually been confronted by something that is genuinely inedible. It’s such a ‘shame’ that I never had photographic evidence of this, but I’ve once came across a certain ‘stone-like’ cake. It’s stone-like because our rugby guys tried 10 minutes to cut into it, without success. All we could do is to leave it on the side…

Until a teacher walked over and started lecturing us on the importance to not waste food and there are children somewhere else who’s going hungry, so on and on.

We told him we couldn’t eat it. Assuming that we simply disliked the food (which admittedly was a common occurrence), he tried to show us that the food was nice enough.

He couldn’t cut open the cake either.

After all these horror stories, I hope you’ve had more of an idea of how boarding house kids endured their lives. But it wasn’t the end yet. As an Asian kid, there are another tsunami-worth of problems… arising from your school trying to cook Asian food.

Episode One: During ‘Chinese New Year Dinner’; everybody who eats Chinese food at home tries to avoid it.

Episode Two: While waiting in the queue for food one night, one of the chefs approached us and asked ‘In Chinese cuisine, how much butter would you usually use?’

Episode Three, also the most disgusting of them all. For those you unfamiliar with what a ‘Red Bean Soup’ is, here’s what it is supposed to look like.

One of the key ingredients of this dish is ‘dried tangerine peel’. It is fairly difficult to find them in the U.K., but let me tell you this: two litres of orange juice in concentrate WILL NOT DO THE TRICK.

Now, not all school food is as horrific as described. You always hear feel-good stories about how the food at another school is really good.

But that never seemed to happen to me…

← 20 Signs that You Have Been Away from Hong Kong for Far Too Long
Introduction to the Chinese “Dialects” (1) Cantonese v. Mandarin →