We have all used Google image search. Whether we are looking for a school project or a computer wallpaper, you can access billions of images in a few clicks.

What these images tell us can be very striking. Since our searches have all played a part in perfecting the search results, Google is basically the result of human thought. When applied to countries and cities, this is particularly interesting: unlike items, no single image can fully encapsulate the whole place, thus the first few images that appear really explain how we, as the World, perceive a particular place.

However, searching in different languages makes this very interesting. To some extent, this shows how people from different parts of the World imagine about a particular location. And this got me thinking, how does English and Chinese google users differ in their Imagination of Hong Kong?

So here’s what I did: I searched via Google Images a few locations of Hong Kong, first in English and then in Chinese, and selected the first result. I’ve tried to make the search terms identical. The previous post in May 2014 did not pay attention to Google Now and how my personal preferences had altered the results. This time, I completed the searches on a public computer.

The top result (sometimes, top 5 results) was almost always from Wikipedia. For sake of variety, I’ve allowed myself to look at the top 10 or so images and picked the most contrasting examples; however a theme would only be picked if there were at least two images attributing to it. The language differences really do tell us a lot about the different perception of the city. Here it goes… 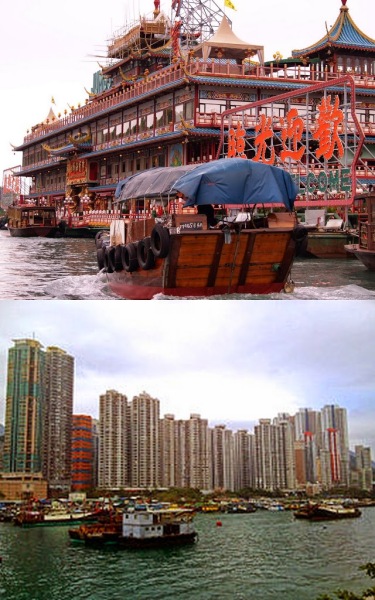 Aberdeen is originally a fishing village in the southern shores of Hong Kong island, famous of its floating village and seafood.

Indeed, the English search returned a photo of the Jumbo Floating Restaurant, perhaps of the most famous of those seafood restaurants. For foreigners, Aberdeen presents the image they have for the city, perhaps a ‘little Hong Kong’, just like its Chinese name suggests: an oriental fishing village with a floating imperial palace, where triads kung-fu each other aboard Chinese junks, only for Jackie Chan to appear out of nowhere and kick all the bad guy’s asses. The world is saved…

In reality, none of those really happens anymore. Very few people live permanently on boats, and Aberdeen is just another concrete forest of Hong Kong, with the typical problems of traffic and high house prices.

English: photo of a bar on Lockhart Road, from CNN Travel
Chinese: photo of Wo Cheong Pawn Shop, a historic Tong Lau, from 李Sir圖庫

Wanchai, a Chinese area from the very nascent days of colonial rule, had two sides: one of historic nostalgia; and the other crazy nightlife.

Wanchai boasts many pre-war buildings. Indeed, googling 灣仔 on images also gives other historical structures such as the Blue House and the Wanchai Police Station. With historical buildings comes urban renovation and reconstruction projects. While striking a balance between development and preservation is notoriously difficult, the reality is that much of Old Hong Kong in Wanchai, such as Lee Tung Street, is now being torn down for shiny new (and high-rise) developments. Is these sort of development good economically for the city? Most likely. But from a touristic point of view, destroying what makes you unique doesn’t seem to be a viable strategy.

Wanchai always had another side anyway though: since the 1950s it is one of the major bar area (and red-light district) in the city. Although it is said to be not as raunchy as it was in the past, the accompanying article of the photo above is called ‘The dirty-fun guide to Hong Kong’s Wanchai Bars’. While its historic architecture may be disappearing, the storyline of ‘The World of Susie Wong’ definitely exists.

Chinese: photo of the ‘Muddy Turf Fiasco’, during the Barclays Asia Trophy 2013, from Apple Daily

Who says Hong Kongers don’t like sports? They do, they just rarely play themselves. The above collage shows Hong Kong Stadium, the largest in the city perhaps most famous for hosting Hong Kong Rugby Sevens and also the Barclays Asia Trophy, a warmup exhibition tournament featuring Premier League teams.

To be able to host a major, if the most importantly Rugby Sevens tournament, one can reasonably assume that Hong Kong is Rugby-crazy. It’s not. Despite relative success (I believe Rugby has the highest world ranking of all Hong Kong team sports), it remains (bizarrely, in my opinion) an expat sport as locals dedicate themselves to European football, and of course Manchester United in particular.

Thus, local sports have been neglected. While it was a powerhouse in Asian football, playing is almost actively discouraged by result-weary parents and as a result funding has diminished, leading us to the ‘Muddy Turf Fiasco’. You’ve finally got Man United to play in Hong Kong. And then you want to them to play in the mud? No wonder they say Hong Konger don’t like sports. 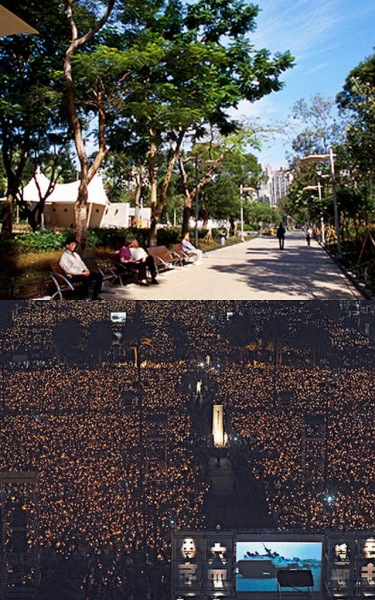 English: photo of a path within Victoria Park, from the Hong Kong Tourism Board

Victoria Park is the largest park in Hong Kong, providing a much-needed sanctuary in this forest of high-rise buildings in the commercial district of Causeway Bay. Pretty ordinary indeed. However, as one of the very few open spaces at the heart of the city, it came to acquire a political significance.

The two biggest annual political gathering of Hong Kong both involve the park in some way: the commemoration of Tiananmen Square crackdown on June 4th has been held annually in the park, and the July 1st political demonstration always starts from the park. Hong Kong politics is a confusing and polarising minefield, especially since I last wrote this article.

I’ve heard many who mistakes Hong Kong as a democracy (maybe of sorts a la Singapore), but in reality the struggle for it persists. What relationship should Hong Kong have regarding China remains the most divisive question. Identity politics has dawned, with no satisfactory solutions in sight. Where will this city go? 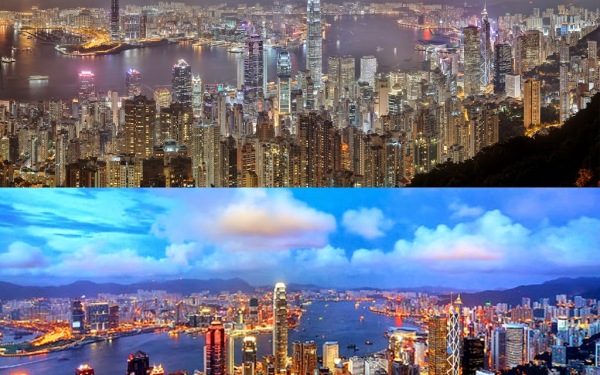 English: photo of Victoria Harbour from the Peak, from Wikipedia

Chinese: photo of Victoria Harbour from the Peak, from Hong Kong Government Website

Watching events from afar, I might have sounded very pessimistic. But Hong Kong is still here. Both the rest of the world and Hong Kongers agree that it’s a beautiful place, fit for its name of the Pearl of the Orient.

The city is very much alive. But we’ll need all your help to keep it that way.

(I do not own ANY of these photos. They are all search results from Google image, with origins cited below. If I have infringed on any copyright, please contact me and I will remove the said photo)

** “Hong Kong’ is added in the search term to avoid places with the same name.