After spending a fruitful day entirely on the preserved (or not) railways of North Wales, the trains have taken me back to the North Welsh coast to visit another ancient fortification: Conwy.

Rather paradoxically, though, due to the (brilliant-as-always) engineering works, no further trains was used until my return journey to London. Totally disappointing.

Having transversed Conwy valley yesterday, I arrived at its namesake walled town. Roughly midway on the road between Chester and Holyhead, Conwy (anglicised as Conway) has been an important travel outpost for Ireland since the Middles Ages, and the postcard-perfect little town is home to another World Heritage Castle.

Much like its counterpart in Caernarfon, Conwy Castle was built at great expense by Edward I as he attempted to subjugate the rebellious Welsh; though without those Roman myths, Conwy was chosen simply because of its strategic location and, well, the existence of previous installations across the bay.

Also, because it’s a rather nice place to live? 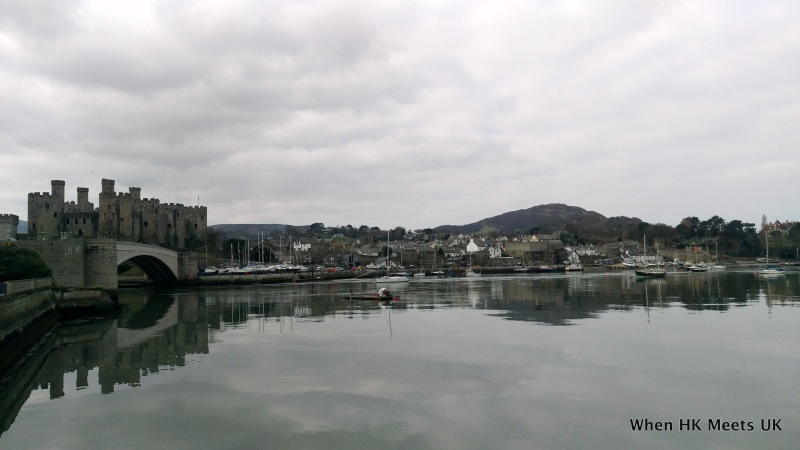 OK, it’s a bit gloomy but it was March in the UK, what else could you expect?

Not planned to be a permanent Royal residence, Conwy may well be considerably more ‘compact’, but it does have a major advantage from a touristic standpoint: it was actually completed and largely survived, with its great towers all intact. (pun intended. ‘standpoint’ and ‘towers’, get it? It sounded better in my head…)

Comparing Conwy further with Caernarfon (you can see Caernarfon had made quite an impression on me), Conwy is also a walled town, and the excellent defensive walls have stood the test of time. Ultimately, Conwy is the most medieval town in North Wales, and perhaps the country, full of medieval character.

The Welsh Historic Trust’s guidebook, as found in the gift shop later, declares Conwy as one of the great fortresses of medieval Europe. Having arrived on the westbound road yesterday night, it is not difficult to see why. The castle sits and dominates the entrance of Conwy, itself occupying strategically the narrow strip between the land and the sea. The towers emerge from the landscape and, capable of striking immense fear into any attacker’s mind.

I actually doubled back on the brighter morning just to capture that stunning view.

However, before we enter the castle, let’s first admire the bridges. Conwy connects eastwards by three parallel bridges: the more interesting two by Thomas Telford and Robert Stephenson, those juggernaut engineers of the Victorian era.

From the castle battlement. I think you know which is the boring bridge.

The Conwy Railway Bridge a.k.a the one on the right is a rare example (and if Wikipedia can be relied upon, the only surviving) of a tubular bridge in the world. As I understand it, a cross between a bridge and a tunnel, used as suspension bridges weren’t quite strong enough to carry locomotives at the time. Having gone through the bridge earlier in the journey, I can only tell you that it was a noisy ride. Maybe that’s why they have almost become obsolete. It’s good to look at, though – if not good to look from!

One of the first thus oldest road suspension bridges in the world, the Conwy Suspension Bridge (also the middle one) was the first proper attraction of the day. In fact, so old that it has come under the supervision of the National Trust for almost sixty years.

It’s so old that I actually mistook the bridge as part of the castle’s infrastructure. Trash my scientific knowledge all you want (iron bridges in the 1200s?), it’s a plausible mistake when you realise the bridge was designed to match the adjacent castle. Trust me.

Walking along the bridge, what caught my attention was an ancient toll sign. (the bridge is now free. As a National Trust member hoping to pretentiously shove my membership card at somebody, I was disappointed) The sign laid out painstaking details on how and what everything will be charged from weight to engines, down in the number of legs on your livestock. This is perhaps the only ever credible use of those year 4 maths questions.

Then onwards to the castle. The rocky Welsh coast provided a linear outline for the castle with the narrow stretch of land forming the natural defences. The outside already impressed and the stone portions of the castles survived very well* and it is easy enough to imagine how life would have been. not the mention the towers offers some of the most breathtaking (literally; very tall stairs) of the Welsh coast.

*Before preservation became in vogue, the railway companies did not bother about avoiding historic landmarks on route. Instead, they simply smashed through the walls and built a station in the castle’s underbelly. On behalf of all trains, I do apologise.

While the castle is the obvious attraction, Conwy’s walls are well worth a walk around. From an advanced position (euphemism for: on top of the hill) that was my hostel in the morning, it certainly made the descend more interesting too. The walls are some of the most well-preserved in the country: accessible and not encumbered in any new-builds, it’s a journey back to the middle ages – until you found yourself a little lost and drugged out your smartphone.

Conwy’s high street also has a few interesting sights – namely houses of different kinds. The strangest one is the 14th century Aberconwy house, the oldest house standing in the town. Home to a merchant family, its interior is decorated as if it was centuries ago. Although houses centuries ago are also very small and you can see everything in about five minutes. (It was a National Property and that was pretty much why I went. Card-waving succeeded.)

The other famous house has a bit of a cult following: the smallest house in Britain. The house has, according to Wikipedia, a floor area smaller than a snooker table while its height is not more than two of myself. Let’s just say it looked even smaller in plain sight.

The house was lived in, apparently, until the 1900s and its last occupant was a 6-foot-3 fisherman.

After the morning tour, I headed to the last stop – and also the final chapter of this drawn-out-as-always travelogue: Llandudno, the Queen of the Welsh Resorts.

Unfortunately, not by train.