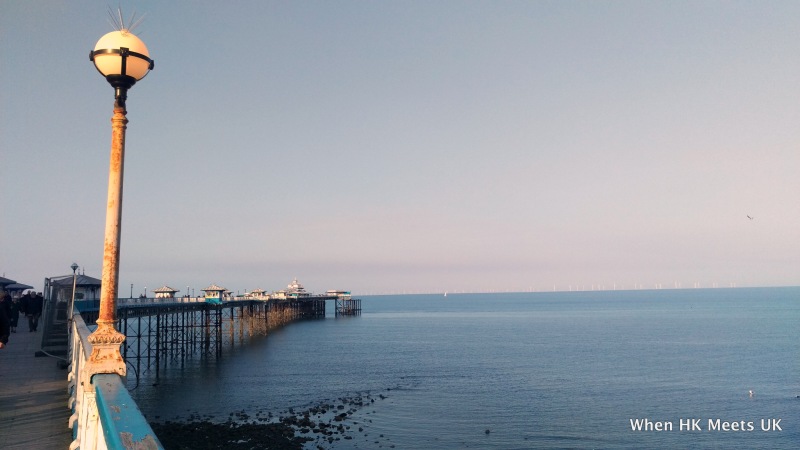 Yes, I know, the chronicles of my foray into North Wales has dragged on for months. (The speed of this series makes it seem that I’ve been living in Wales for months). However, with most serious distraction now over, it is finally time to round out the series with a classic destination: the seaside at Llandudno, the “Queen of the Welsh Resorts.”

Again, apologies for the misleading title: the darling that is engineering works has precluded the appearance of railways in this piece. Stranded at the station with no data allowance on the phone, I did – for the first time in forever – called National Rail for the timetable…

Llandudno is the largest seaside resort in all of Wales. Yet, when you are travelling alone and mostly for the trains, a mid-March trip to the seaside does not figure much in my plans unless there was glorious (read: not grey) weather all round. And that was what we had! Blessed with the surprising sunshine, I decided, on a whim, to take the bus down. (Hence the episode at the station…)

The phrase ‘largest seaside resorts’ evokes images of the nostalgic holidays, the likes of Blackpool and maybe Margate. I expected the traditional affairs: coin arcades, ice cream and rundown/hipster funfair. However, as I stepped off the bus at North Western Gardens I was presented with a completely different type of sight: 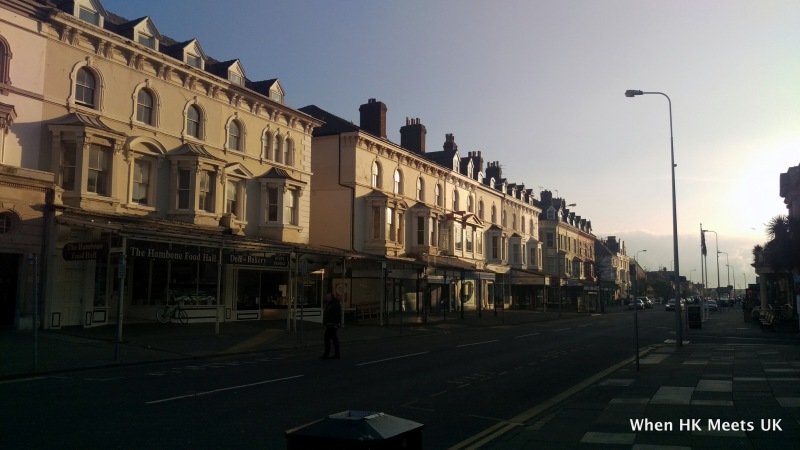 Beyond a neat, landscaped garden stands well-maintained Victorian townhouses, enhanced by the sunlight in sparkling white; ironclad verandas sit atop the main shopping street filled with fashionable cafes and restaurants as if lifted straight from a classic romantic film (although Poundland also makes an appearance, of course). The entire town lies in the backdrop of the Great Orme, a limestone headland adorned by gardens and sheep from which a spectacular view may be enjoyed across the Irish Sea and beyond.*

*May, as I didn’t manage to get there. Great source of disappointment, as explained later.

And that was mostly in Mostyn Street, the inland little brother of the famous seaside boulevard:

By the seaside grand hotels stand, constructed by the height of Victorian fashion: buildings so sophisticated that the photo above could have easily been mistaken as Helsinki or St. Petersburg. This is at this point I realised that Llandudno is not only the largest but also among the more upmarket resort I have visited in the UK. This is no Blackpool but where you stare out are the calm sea, while having afternoon tea.

The railways came relatively late to Llandudno: mainline trains simply bypassed the peninsula en route to Holyhead, which meant it also came into the resort industry. It was not until a spur linked the town in 1858 that the local landowners, the Mostyns, noticed Llandudno’s potential as a tourist destination at began building. The initial plan to develop Llandudno as a port for Ireland was unfortunately dashed by storms. With Blackpool firmly in the lead for popularity among resorts in the North West, Llandudno turned itself into a more upmarket resort, a more refined alternative for the Liverpool merchants. With its beautiful hotels lining the shore alongside art galleries and theatres, the elegance has persisted.

(But of course it’s still  the seaside: the nightclub and the hen party is always just around the corner.)

After my failed quest to locate a working homeward train, I stumbled upon a magnificent terracotta building that houses the Mostyn, a modern art gallery and museum for North Wales. Embarrassed to almost be the only visitor, I spent some time looking at the exhibits, before making a quick escape, avoiding the judging eyes of stewards and shop assistants.

The museum did showcase the elegance of this resort, yet of course, the place can only be judged from the promenade…

Behind the sands but before the hotels, much of the promenade is paved. Sitting there, looking out to the crescent bay, it dawned on me that I often visit the seaside at the colder, more unsavoury months: Blackpool in November; Southend December; Northumberland in  anytime, even though these towns only come alive in the brief summer. I much prefer the quieter sea, I guess.

Speaking of the sea… let’s just say it was the right to way to visit.

Under the calm blue sky lie is the likewise calm blue sea, clear enough to see the wind turbine far, far away. Jaunting out from the peninsular is the Llandudno Pier, a quieter version of the seaside staple and still the intermittent port of call for paddle steamships to the Isle of Man.

I trotted down the pier cautiously (never a good swimmer, always suspicious on walking above water), expecting to find funfairs of the Brighton sort, only to find a peaceful (heck, dearth for business) cafe at its extremity. It may have been mid-March and I may still be clad in a winter coat, nevertheless I ordered an ice cream, to be enjoyed at the benches facing the promenade.

Looking out at the calm sea and the magnificent building behind, it was the perfect time to contemplate about… anything. What am I doing? Where do I want to go?

As it turns out, there ought to be a limit on being sentimental, because the nice time spent thinking about things led directly to me missing a railway attraction. Since I didn’t plan on visiting Llandudno, I also poured in little effort in researching the place. I took one look the Great Orme and thought ‘Nah, not in the mood of climbing’, without realising that there is a STREETCAR up!

The Great Orme Tramway is a century-old funicular railway that runs between the streets of Llandudno and the summit of Great Orme. Ran entirely on carriages dating from 1902, it is the only cable-powered streetcar in the country. The design and street-running of cars echo San Francisco, although its mechanics is more akin to the Peak Tram in Hong Kong.

I only found out about the Tramway from a random sign on the beach, and by the time I reached the station it was too late to embark on this wonderful journey. All I can do was snap some photos. Another reason to return then.

After some further stroll around town, it was time to head for Euston and thereby concluding my first experience in Wales. With its shares of castles, coastlines and (of course) steam railways, this distinct part of the country has not disappointed. Wish to be back.