Searching for Hong Kong in Liverpool

(I must admit that I haven’t written much in English recently, simply because they are not nearly as popular; but heck I write what I like) 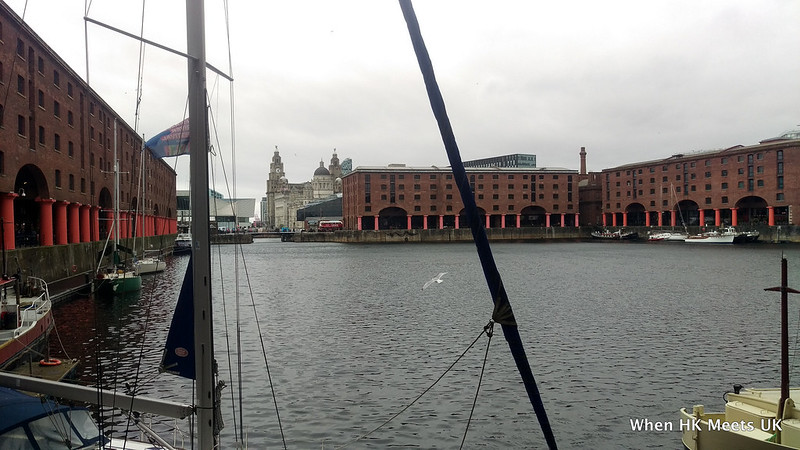 April 2017. The city was enveloped in the grey clouds, the winter sun having proved ineffective in its cameo appearance. I stood alongside the historic docks and warehouses, looking out across the water.

The Second City of the Empire; the most important commercial port; the city of dreams for immigrants; the melting pot and hub of popular culture.

From a window on Albert Dock, I contemplated the high praises lavished upon Liverpool. Yet, I cannot help but think that these titles were fittings to another city halfway across the world as well. The Hong Kong of the past; the Hong Kong that I did not really know.

The stories of Liverpool and Hong Kong trekked a remarkably similar path. Both were hamlets thrust into the limelight when it conveniently served British commercial and imperial ambitions. (And when the preferred location was unavailable). The cities became the ends of the East-West colonial trade, becoming enormously wealthy on some extremely shady ‘business’ dealings.

Naturally, the cities’ prosperity attracted those who were fleeing famine and political hardship, in order to seek a new life. Although integration is never as straightforward as envisaged, both cities have come to embrace the new cultures that have become an integral fabric of the city. Indeed, both cities soon turned to export their own blend of culture: the Beatles and Bruce Lee remain global names.

Of course, the timeline presented here has been grossly generalised. Not least, the chronology is way off. Liverpool’s glorious peak occurred when Hong Kong was but a small fishing village; meanwhile, when the Hong Kong economy lifted off in the 1970s, Liverpool was languishing in the trench of its post-industrial depression.

Things have changed a lot in the decades since. The influx of investment has injected a ray of confidence into Liverpool’s renewed city centre, and Merseyside is now home to one of the most vibrant cities in Europe. Perhaps stemming from the city’s multicultural and left-leaning background, foreign visitors will find Liverpool to be the anti-London, where the capital’s snobbishness is replaced by an (over-?) idealised sense of community.

Again, labels slapped on Hong Kong’s difficult but nostalgic 1960s and 1970s. So here I am in Liverpool, searching for shadows of Hong Kong. 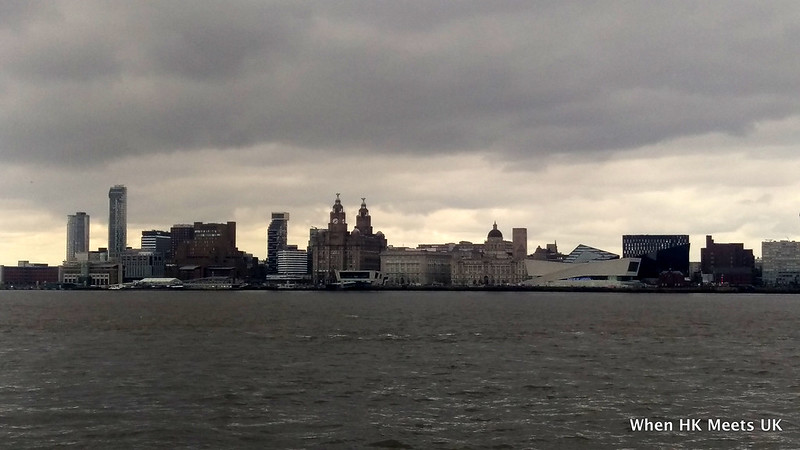 Travelling in Liverpool and Hong Kong may well leave tourists with a sense of deja vu. Those who find themselves in Hong Kong will surely take the Star Ferry across Victoria Harbour, from Kowloon toward Hong Kong Island’s concrete jungle. Iconified in the West via The World of Suzie Wong, the ferry has captured the imagination of this “exotic” corner of the “far east”, and has consequently made its way into every guidebook to Hong Kong in the known world.

A few years from the release of Suzie Wong, another famous song and film would similarly elevate another ferry service to iconic status. Taking the Ferry ‘Cross the Mersey. The famous song and film, released in 1964, may well be more than triple my age, yet it firmly remains the premier tourist  activity, obligatory for any first-time visitors to Merseyside.

My journey began ‘on the other side’: Birkenhead, on the Wirral Peninsula across the river. Liverpool is the hub of the region, the commercial heart. In comparison, Birkenhead is where people live: while its old industry and neighbourhood fade quietly behind Liverpool’s glamour, Birkenhead manages to steer away from the mercantile extravagance of Liverpool. Walking around Birkenhead’s 1990s-concrete shopping centres, it almost reminded me of similar establishments in Hong Kong’s public estates. I guess Birkenhead is to Liverpool what Kowloon is to Hong Kong.

I caught the ferry from Woodside. Those familiar with Hong Kong will inevitably see parallels to Tsim Sha Shui. Both were the closest point to the metropolis. Both were major railway termini, complete with a clock tower, for the ferry connections. Both stations were made obsolete by the underground and road tunnels, and neither escaped the fate of demolition. Today, if you were to walk to Woodside, you would no longer be among commuters, but with tourists like me.

I emerged from Hamilton Square station and took a short detour north, towards unassuming warehouses in dye need of rejuvenation. Among those old factories you would find my destination, a tram shed, the Wirral Museum of Transport. 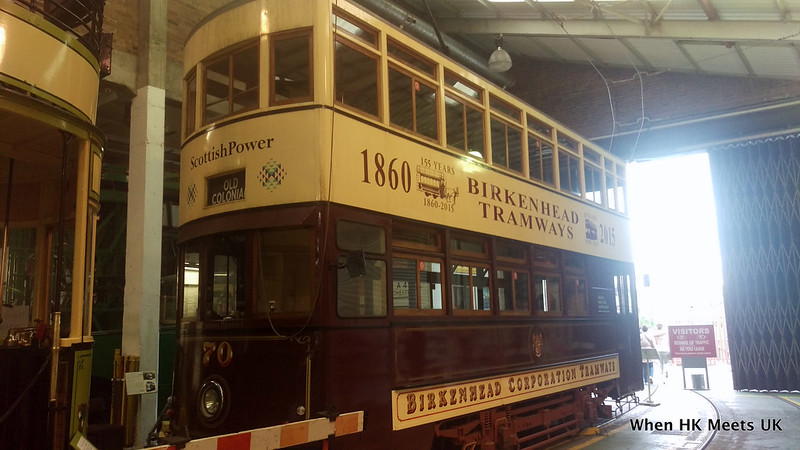 Naturally, all kind of transport museums is my habitat. Yet, despite WMT’s lack of trains proved to be especially dear to me, to that it hosts the only Hong Kong Trams found outside of HK. It was the first thing I saw upon entering the train shed. The two trains were what remained of Hong Kong Tramway’s failed export scheme in the 90s to sell trams to Blackpool.  Although it was clothed in Birkenhead’s livery, it was unmistakably a Hong Kong model, one that I used frequently as a child.

Not only could I see this tram, I could travel on it too. The WMT’s volunteers run a tramway from the museum to – you guessed it – Woodside Ferry Terminal. Whether in Liverpool or Hong Kong, it had been decades since anybody could arrive by tram to meet the ferry. Yet this is exactly what I did, taking a Hong Kong tram, at this corner of North West England, to go to Liverpool.

The current Woodside Terminal is an 80s reincarnation, its drabness provoking a stronger resemblance to Hong Kong’s no non-sense architecture. The ferry no longer runs nearly as frequently as it did in its heydey; indeed the journey has in essence been relegated to a tourist service. The route was deliberately lengthened and on-board commentary was provided for all those seeking a vista of the Liverpool skyline. 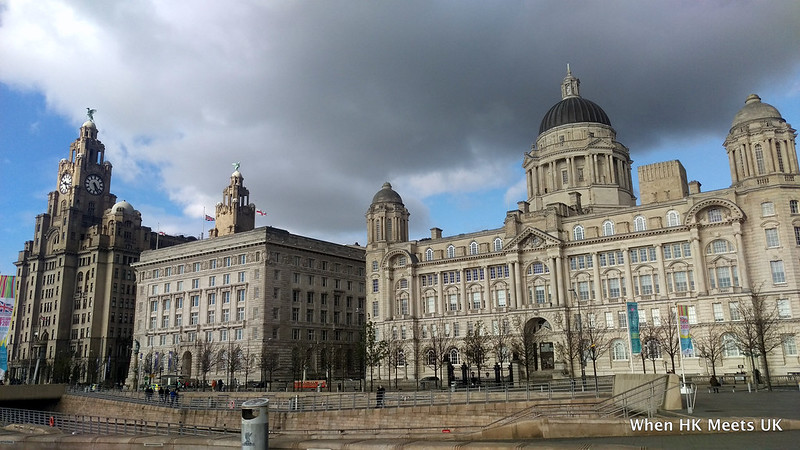 And it’s not a disappointing view, to say the least. Granted, without Victoria Peak and the hundreds of skyscrapers that adorn Hong Kong, Liverpool’s harbourfront is rather vertically challenged. The spotlight naturally felt upon the Three Graces, the three skyscrapers of the 1900s that continue to dominate the Merseyside panorama, in a rather more classical taste. The offices of shipping companies and the port authority have now evolved into the city’s most recognisable view, and it’s a UNESCO World Heritage site in its own right.

On the left, the Crown Jewel of the Three Graces: the Royal Liver Building. The world’s first structure to be constructed by reinforced concrete, a far more interesting technique in the 1900s, it was perhaps the UK’s first ever skyscraper. At the zenith of the tower sits two Liver birds, mystical creatures perhaps best known internationally on Liverpool F.C.’s crest. Legend has it that the city’s fate is intertwined with that the birds. If the birds were to ‘fly’ away, the city’s doom would be sealed. No matter Liverpudlians have literally screwed the birds on the building. Just to play it safe.

A visitor to Hong Kong’s skyline will surely note the city’s modern architecture; testament to the city’s recent and rapid growth, it came at the expense of many older buildings. Had Hong Kong’s economic rise came decades earlier, or if preservationism was higher on the agenda during the 1970s, Hong Kong could have had a very similar view, too.

Nevertheless, history never waits, and instead powers on at its own volition. Things of the past always seem better in our minds, such is the power of nostalgia. Hong Kong’s changes allowed it to become one of the world’s foremost financial centres; similarly, Liverpool has to move on from its previous appearance as well. Completed in 2011, the ultra-modernist Museum of Liverpool is the latest addition to the harbourfront view. This is Liverpool’s history museum, filled with (self-aggrandising?) tales of the city, and of its people.

It is free to enter the Museum of Liverpool, from which you can have the best view of the Three Graces. In Liverpool, this is a space reserved for the public; I imagine the stories would be different elsewhere.