I soldier on in the Orkneys. Today, for a couple of history lesson. 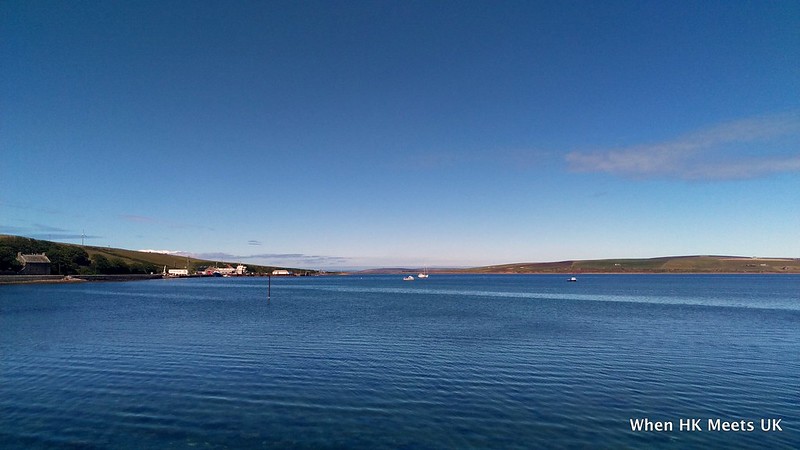 I arrived on South Ronaldsay by bus, it being the southernmost point of the Orcadian bus network. It was late morning, the bustle emanating from the trains of container freight that disembarked from the early ferry from Scotland had ceased, and as I only passenger to alight I found myself, alone, walking along street brightly lit by the misplaced sun, eyes firmly affixed to the sea vibrantly blue.

This was St. Margaret’s Hope, a tiny village with a most lovely (read: tragic) name, after a child Scottish princess-to-be who failed to survive the treacherous voyage from Norway. I suppose she must have hoped for today’s weather instead, with the intense ray of sunshine that would’ve been out of place anywhere of the United Kingdom, let alone in these Northern Isles of Scotland. Or so I concluded with the Arts & Crafts shopkeeper located off the only vehicular road in the settlement.

I had forgotten to visit the cash point at Kirkwall and found myself short in St. Margaret’s Hope. I was directed from the village’s only pub to the village’s only “supermarket”, whereupon I could sign for cash at the post office counter, the old-fashioned way. Armed with newfound polyester Bank of Scotland notes, I returned to the pub and duly handed them over in exchange for a crab sandwich, beer and a cup of tea, enjoyed at the pubs’ beer garden, in a scene that was surely repeated manifold in the resorts of the Mediterranean.

After lunch and the visit to the Art & Crafts shop (“you should also visit the Blacksmithing Museum, she pointed towards an, ultimately, closed workshop drenched in rust), what remained on the to-do list was to wait for my return bus, a brief chat about the weather of the occupiers of the holiday let next door, and to enjoy this view.

Scapa Flow and Churchill Barrier no.4, from Burray 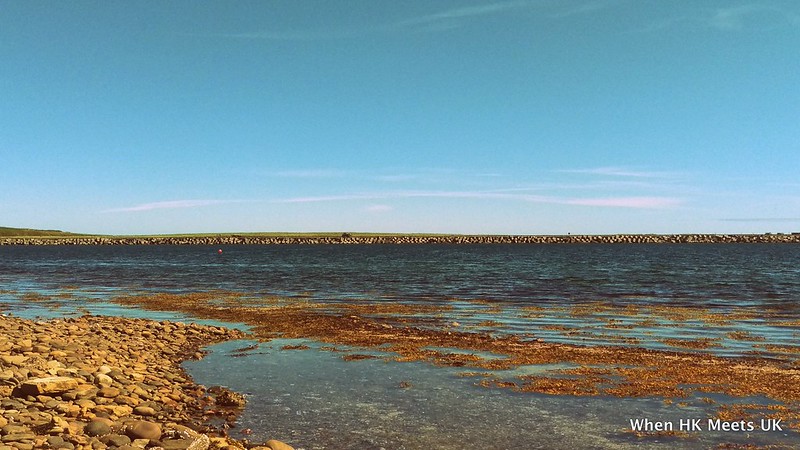 South Ronaldsay and Burray are islands, connected on the Orcadian bus network by a series of causeways known as the Churchill barriers, its origins laid in the Second World War.

Scapa flow may well be the only Orcadian reference in a history textbook. For those who (begrudgingly) did a History GCSE, Scapa Flow was the base of the British fleet, and the graveyard of the German fleet – after the armistice of World War I, what remained of the German fleet was towed to Scapa Flow, where they were scuttled to prevent being split as trophies.

World War returned (season II?) to the Orkneys twenty years later. Determined not to find itself sunk again, the German U-boats devised a surprise attack on the harbour, evading various safeguards in the process. Alarmed, Churchill ordered the constructions of a series of causeways, effectively sealing off the eastern flank. Churchill’s namesake barriers did little for the war effort, the earth-moving work took years to come in fruition, by with time the Germans had long lost the ability to command the seas. The Churchill barriers, in fact, became a vital road link for the far-flung (in Orcadian standards) islands to the south.

This is the view from the Isle of Burray, the “next one up” from South Ronaldsay on my island-hopping trail. After the satisfying lunch, I had, in typical fashion, an hour to spare, and was keen to chase the sunshine. I alighted at the outskirts of the eponymous village picked up an ice-cream at what appeared to be the only corner shop, and set out on the road to the pier, Burray being a fishing village after all.

I sat on some barrier rocks eating ice cream. Around me, life scenes revolved. A family of four or five, all dressed in diving suits, played among the rocks and the shallow sea; on the other side the hotel, perhaps the most prominent building of all of Burray, a coach load of tourist, all aged as if they would be entitled to free travel, boarded the tourist bus. I sat at the beach. And then I moved on to the next island. 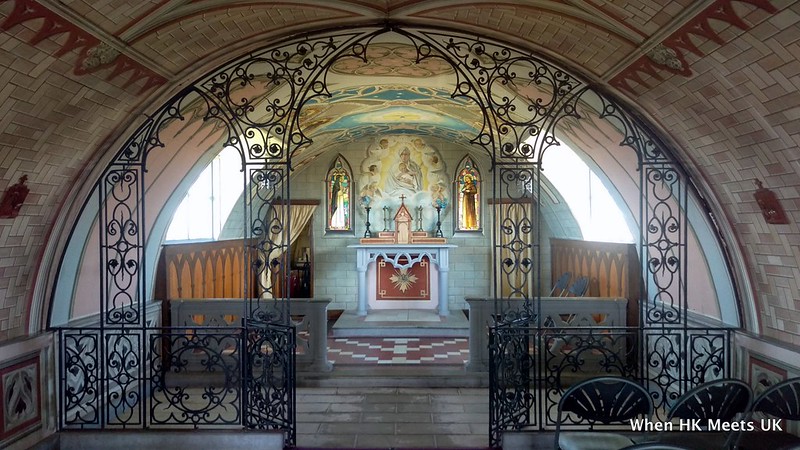 You’d find Lamb Holm a couple more islands up the chain, the closest to mainland Orkney. This tiny, uninhabited island had but one attraction, again with a WWII theme. The Italian Chapel.

The year was 1942. You were an Italian conscript. You found yourself part of the Italian army fighting in North Africa. The campaign started well but went downhill very quickly. You were cornered. You were captured by the British. You were sent to a prisoner of war camp, somewhere far far away,  off any map of Britain that you could picture. You were told to quarry and build some causeways. It was bitterly cold and windy. The war continued and continued. You didn’t know when, or if, you would make it out of these wretched islands. You turned to religion. There were no churches on the island; the ones on the mainland, few were Catholic and none Italian. You decide to build one yourself.

You ask the POW camp commander for one; he gave you two standardised, iron Nissen huts. You put them next to each other. You took plaster and concrete leftovers from the causeway building to fashion and furnish the chapel. You found your most able craftsman among the POWs to illustrate and decorate. Result: this.

It may be the most spectacular building in all of Orkney. I arrived when a mass was ongoing and was instructed to wait outside. Other tourists who had arrived later drove away, promised to return. I had no such luxury, so I sat at the grass field outside, taking pictures of the chapel’s exterior and enjoying the sun. When the mass was over, I sneaked in first. Two ladies were clearing up, folding up chairs, but was accommodating enough for the above shot. 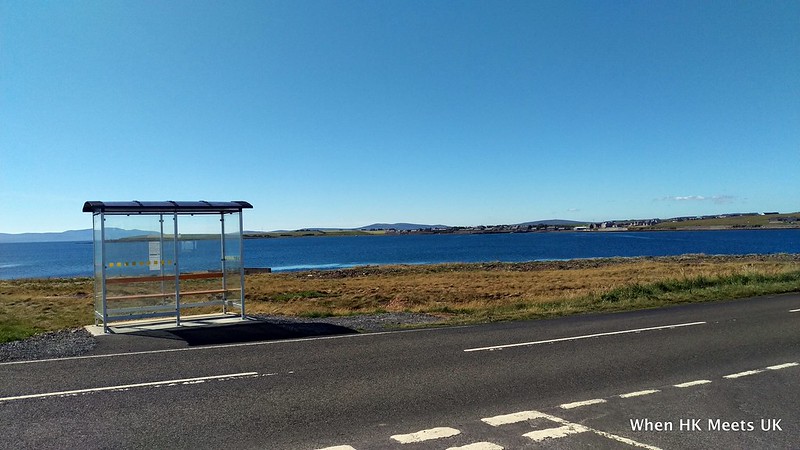 I waited for my bus back to Kirkwall here.