It shall be obvious, I believe, to regular visitors that a special place in my heart is reserved for Japan: it’s a country that I’ve had the fortune of visiting frequently in my youth, crowned by a short but fulfilling teaching stint in Kansai. Nevertheless, as everyday life now takes its precedence, a visit to Japan is never quite a casual hop as it used to be. Particularly, when enduring the London rain, I’ve often dozed off to dreams of roaming the streets of Japan…

Although I don’t have a teleporting device, I do live in the metropolis that is London. Since moving back from University, I’ve steadily accumulated some favourite locations for those who like me would like to escape to Tokyo one afternoon at a time. Monuments, gardens, shops, all things in Japan, this side of the world.

(Even though I’m more of a Kansai-jin – Osaka rules!)

This first article will detail my search for Japanese culture in the capital – essentially, I’ve going to save the food blog for another post!

For Monuments: The Japanese Gateway at Kew Gardens

If the need to leave London behind once and for all for Japan ever arises, head to Heathrow. Unless if you only have an afternoon to spare. In that case, look no further than the Kew Gardens. Also, bring at least £15.Occupying the secluded southeastern corner of the Royal Botanic Gardens at Kew, The Japanese Landscape is definitively the most Japanese spot you’ll find in all of London. Initially envisioned as part of the 1910 Japan-British Exhibition and subsequently expanded, it consisted of the ‘Japanese Gateway’ and its surrounding landscape:

The Japanese Gateway: an original legacy from the 1910 Exhibition, this ornate gateway is a smaller-scale replica of Chokushi-Mon (勅使門, “Gate of the Imperial Messenger)  found in Nishi Hongan-ji, Kyoto. Saved from dilapidation through painstaking restoration in the 1990s, it is quite simply the most impressive and authentic example of Japanese architecture in the capital, a historic piece in its own right.

The Japanese Landscape gardens: designed to complement the Gateway, it is subdivided into three sections, each providing its own Japanese inspiration. The Garden of Peace, a traditional tea garden (shamefully, though, a tea room is absent). The Garden of Harmony, consisting mostly of Japanese flowers. And the Garden of Activity, of gravels, boulders and water features. Take this informative post with you to fully immerse yourself.

Kew is also home to the spectacularChinoiserie pagoda which should stand as a tranquil backdrop for the Japanese gardens – though currently under restoration.

The marvellous landscape at Kew is, quite literally, behind a hefty paywall; if all you require is a short reminder of Japan, Holland Park is the place to go. An affluent and fashionable park in an affluent and fashionable area, Holland Park bears no relation to the Netherlands – but to the Earls of Hollands, of wonderful… South Lincolnshire. You can guess why they prefer West London.

Formerly home to the Earl’s great house, the park gates are a portal, opening onto a surprising wild nature in the centre of London. Thick woodlands stretching into the sky. Scenic gardens surrounding Italian fountains. On a bright day, it feels like Tuscany.

Let’s return to topic: the Kyoto Garden is a tiny traditional garden buried deep in the woodlands, donated by the Kyoto Chamber of Commerce in 1991. Boulders, waterfalls, ponds, koi carps, stoneworks, benches: wonderfully ordinary if found in Japan but extraordinary in London, it will transfer you to Japan in no time. Perhaps it’s wishful thinking, but the approach to the Garden really reminded me of Inokashira Park. I look forward to returning for the autumn maple and spring hanami.

I imagine the Garden usually a quaint little space, although as of September 2016 it seems to the most popular Pokestop in the entire United Kingdom. Not exactly a quiet place to meditate right now…

British and Japanese culture may have both been shaped by an insular reality, but of course, you won’t find religious and architectural treasures in the likes of Asakusa or Todai-Ji on the banks of the Thames. Or can you?

While much better known for another landmark (the Cats and Dogs Home!), Battersea is also home to London’s Peace Pagoda. In Battersea Park, you will find the Peace Pagoda, a double-roof tower flanked by golden statues of Buddha on all four sides. Built by the Nipponzan Myohiji Buddhist Order at the height of the Cold War, it was meant as a monument to world peace, to promote harmony instead of nuclear armageddon. Naturally, similar monuments exist in Hiroshima and Nagasaki, but also around the world. The London Pagoda is the newer of two British pagodas, after – of all places – Milton Keynes.

The Peace Pagoda may not strictly be a temple, but according to a dated BBC article, it is maintained daily by a Buddhist priest who offers prayers. Sitting by the calmer stretch of the Thames, this is the place to reflect and one of my favourite spots to read in town.

I know it looks nothing Japanese… good view though

Daiwa is a charity, set up by the synonymous banking group, that aims to foster relations between Great Britain and Japan. Perhaps most famous for its grants and scholarships for British students to study in Japan, it also organises periodic seminars and exhibitions. The Foundation’s base, Japan House, is a grand Japanese townhouse on the edge of Regent’s Park, is a wonderful space for these cultural events.

Daiwa has an exclusively Japanese focus, regularly renewed, and is why I rate it higher than the excellent Japanese sections in the British Museum and the V&A. One thing to watch out, though: Daiwa has no regular exhibition, make sure you don’t turn up on a day without one… I’ve done that before. I may have done it when I tried to go again before writing this.

Ha, two picks! The area around Brewer Street, just behind Piccadilly Circus, is in many ways the Japanese extension to Chinatown. Populated by Japanese restaurants and supermarkets, this tiny triangle is also home to a few Japanese bookshops catering to your different Japanese literary needs:

If you can read Japanese, or knows enough to pretend you can, go to Adanami Shobo. Masquerading as a dry cleaner, it is very easy to walk by without knowing its true character. The door acts as a portal between Trendy Soho and those antiquated bookstores in Jimbocho: half-lit by fluorescent tubes typical of the 60s; giant bookshelves stuffed with bunkobon (A6-sized paperbacks), sorted in hiragana order of author; stacks and stacks of manga filling every imaginable space from floor to ceiling; leaving only the narrowest of passage. The authentic experience is boosted by is enormous, almost authoritative content: if a Japanese-language book cannot be found in Adanami, consider searching online: you probably won’t find it elsewhere in Britain (save for maybe the SOAS library?)

If you prefer a more comfortable and brightly-lit experience, then JP Books a left turn away from Brewer Street is much more helpful. It has a varied magazine section from fashion to rugby to maternity; a shelve dedicated to translated works, not merely of Murakami but also the likes of Basho (although yes, Norweigan Wood is naturally there); topped off by a row specialising on Japanese stationery and arts and crafts: minimalistic in design, not followed through by the price… 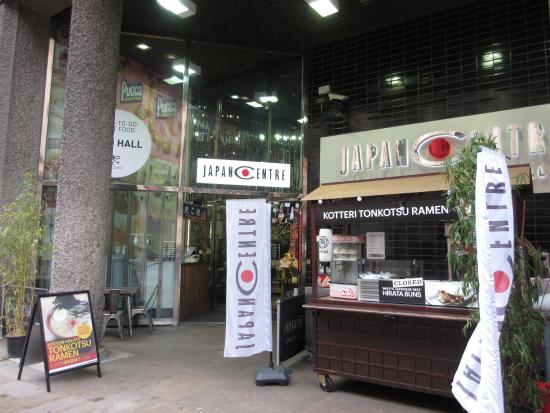 Supermarkets are a cultural phenomenon and not quite a restaurant, so let’s included it here! Unlike the Korean community which congregates in New Malden, the Japanese live a far more nomadic existence in the capital, across North and North West London in Acton, Ealing and Finchley, very far from my familiar abode. So instead of a suburban supermarket, I usually punt for Japan Centre.

Japan Centre is a veteran of the Japanese scene in London, having first opened in the 1970s. Located in the busy thoroughfare of Shaftesbury Avenue (also of Harry Potter fame), access is not an issue. The Centre prides itself as a food hall, but is the one-stop shop for all things Japan: of course, a comprehensive sampling of Japanese food, from Melon-Pan to tofu to litres of soy sauce that I often wonder who would buy. It also maintains a books and a homeware section, useful if you ever wanted to cook from scratch.

The supermarket also boasts a take-out joint which offers a variety of Japanese delicacy at an inexpensive rate (by London standards). I am most pleased, as an adopted Kansai-jin, to report the availability of Takoyaki (octopus balls)!

Stay tuned for the restaurant posts – and get ready to protest if I didn’t include your favourite spot!